One of the standout exhibitions for me this year has been The South London Black Music Archive (2012) by Barby Asante at Peckham Space, South London. This short post will briefly describe this exhibition, explaining why I think it was interesting, and how it speaks to my Ph.D. research.

The South London Black Music Archive engaged with people’s relationship with black music in the South London area. Predominantly authored by East-London artist Barby Asante, the exhibition was presented as an ‘open archive’ to which visitors can add to the objects on display. Peckham Space describes the intention of the exhibition thus: ‘Asante’s selected objects highlighting seminal moments in this history will share the same platform as visitors’ objects and stories depicting their own experiences through music and memorabilia.’[1] The exhibition consisted of one room and encompassed a variety of display methods, including archival boxes, an interactive magnetic map, vitrines, changeable wall displays, shelving and a listening station. Visitors were actively encouraged to contribute objects relating to their experiences of black music in South London to gain “membership” to the archive. The objects were categorised, labelled and stored within boxes and exhibited on a rotational basis in the gallery space. The exhibition encompasses a range of technologies to appeal to an intergenerational audience, including iPods, record players, tape players and a DVD station. Music filled the gallery space; the atmosphere constantly being (re)shaped and transformed through inviting visitors to play donated records and suggested tracks from the listening station. The exhibition also allowed people to share their memories, stories, observations and anecdotes relating to their experiences of black music in South London by texting the gallery. These texts were received and printed live within the space, enabling the visitor to add their printed story to a large magnetic map in the area to which it referred. Within this very small space a multitude of interactive opportunities and outlets for the visitors’ personal expression and contributions to be heard, seen, touched and absorbed. 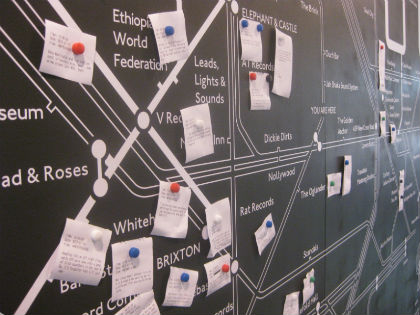 Magnetic map of South London with visitor texts stuck on. Photograph from peckhamspace.com

The facility to allow spectators to feed back into the exhibition was, for me, particularly interesting. In doing so a tension was created between the authorship of the space and the spectator, challenging the identity and position of the artist, whilst empowering the visitor. Through this tension, the aesthetic experience of the space was created based on exchange rather than transmission. Exchange is a key word for this exhibition. It appeared not only in the authorship of the space, but also in the form of the social relations it facilitates. The objects and interactivity of the exhibition aren’t really the art here; it is the social relations created by them instead. This is not to downplay the objects and processes of multiple authorship of the exhibition at all, for they were the facilitators of this social exchange. However, the primary aesthetic, in my opinion, lay in the social relations and encounters the exhibition provoked. In this light, The South London Black Music Archive transformed Peckham Space into a site of dialogue and encounter, using art practice as a technology of connection.

My Ph.D. research is interested in precisely this connective ability of aesthetics coupled with its potential to play a role in the debate surrounding the creation of meaningful encounters in times and spaces of increasing diversity. I attended a fascinating series of sessions focused on ‘Encountering the City’ at the RGS-IBG Annual Conference in Edinburgh last month which opened my eyes to the great variety of research currently being carried out on the understanding of meaningful encounter. I am hoping that my research will be able to add something to this exciting and important topic.