Space, Place, and Protest: The Historical Geography of Contentious Politics in London 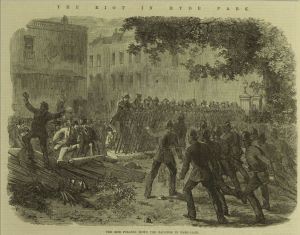 In my PhD I plan to investigate the relationship between space, place and protest in London since 1780. Using case studies including the Gordon Riots (1780), the Hyde Park Railings Affair (1866), the Battle of Cable Street (1936), the Grunwick Strike (1976–8), and the Student Tuition Fee Protests (2010), I will attempt to argue that space, place, and protest are mutually constitutive, that they influence and impact each other (although I am fully prepared to find my hypothesis incorrect!)

The case studies were selected to be representative of the time frame, but also to represent different types of spaces, such as the street, parks, commons, and buildings. Although these distinctions do not stand up to much scrutiny, they help to ensure that as wide a variety as possible of the different types of space that make up London are considered in the project.

The method will of course be mainly archival research, but oral histories or interviews may be utilised for the more recent case studies, to help mitigate a common issue with the historical research of protests, the fact that archival sources are rarely from the perspective of protesters themselves. This is only one of several challenges I face in my methodology, but I hope that I will be able to deal with them all in time.

When I say ‘space’ I mean the physical characteristics of a location, for example buildings, roads, street furniture, or a lack of these things. I will investigate whether these characteristics impact protests as they occur within the space, and whether protests in turn impact the space, either directly or through pre-emptive attempts to limit protest. For example, during the Hyde Park Railings Affair in 1866, protesters broke into Hyde Park, which had been closed by police, by pushing over the railings. The protesters then clashed with police, with scuffles still occurring several days after the protest. If the railings had been stronger, and the protesters unable to get into the park, the protest may well have unfolded differently.

In terms of place, by which I refer to the meanings, connotations and emotions that people associate with a location, I will also look at the interaction with protest. I hope to find out if protesters deliberately make use of these meanings and connotations for the purposes of their protest, and if places are changed because a protest happened within them. For example, in the days preceding the Hyde Park Railings Affair, there was extensive debate in the newspapers about the propriety of using the park for a demonstration. Some argued that the park was for the people, and as such could be used however the people saw fit, whilst others considered the park appropriate only for quiet recreational activities. The Railings Affair sparked a battle over what Hyde Park meant to London and its people.

These examples illustrate some of the issues I may be engaging with during my PhD, and I very much look forward to investigating them further.

One thought on “Space, Place, and Protest: The Historical Geography of Contentious Politics in London”