The quick death of slow scholarship? 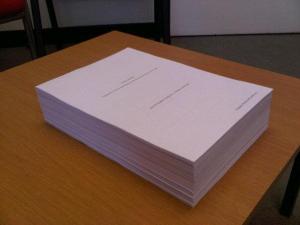 Since joining Landscape Surgery in 2010, I have had a seemingly every-present item of business on which to offer updates during our fortnightly “newsrounds”: the progress made (or, more often, not made) in the production of a co-authored research monograph, Travels into Print: Exploration, Writing, and Publishing with John Murray, 1773–1859. With its origins lying in an 2008 AHRC-funded project, the book has (in one form of another) occupied me and my co-authors (the historical geographer Charles W. J. Withers and book historian Bill Bell) for much of the last six years—a literal and figurative example of what Eric Sheppard has called “slow geography”. Having completed the book’s index last month, Travels into Print is (at least as far as its writing is concerned) now finished. All that remains are the relatively fun tasks—approving the cover design, soliciting back-cover endorsements, offering suggestions over marketing and publicity, and so on—before Charlie, Bill, and I sit back and wait patiently for readers’ praise or criticism.

On informing colleagues of the book’s completion, more than one replied (with tongue more-or-less-firmly in cheek) that this was “one in the bag for REF2020”. With the results of the 2014 Research Excellence Framework evaluation not yet published, it is telling that we, as academics, are already looking ahead to the next point at which the merit of our research will be assessed through an appraisal of four (or so) examples of our published work. Eric Sheppard has written interestingly on how “contemporary merit evaluation culture” (such as the REF) has important implications for “geography’s cultures of publication”.  As Sheppard has argued, a process such as the REF “incentivizes short-termism: ‘fast’ scholarship (more frequent, shorter publications, in journals with high citation counts) rather than the ‘slow geography’ of major monographs”. Indeed, given the length of time needed to research and write a scholarly monograph—and to navigate it successfully through the rigorous processes of review demanded, rightly, by university presses particularly—it would seem illogical at best (and foolhardy at worst) for academics to invest time in writing monographs when the time-scales of evaluation imposed upon them emphasise the strategic value of publication in journals alone.

Writing along similar lines, the historical geographer Robert Mayhew (2014, 277) has recently argued that “the audit culture of U.K. academic life increasingly positions the writing of a monograph as outré, an indulgence, or both”. It is not, of course, just in geography where such pressures are felt. The historian of science Aileen Fyfe (2012, ix) has identified a similar problem in the humanities:

writing a historical monograph is entirely contingent on having the time and money needed to visit archives and rare book collections, and, later, having time to write. These necessary conditions of historical research are coming under increasing pressure in our modern universities.

In those disciplines where research monographs are considered important, and are regarded as the venue in which a scholar’s most detailed, useful, or important work will be communicated, there is a perception that, ironically, the evaluation of scholarship creates the mechanisms by which its value is diminished—that the REF (and similar instruments) encourage the quick death of slow scholarship.

In my role as Book Reviews Editor for the Journal of Historical Geography, I have yet to notice any decline in the rate at which scholarly monographs are published (although I have only my perception, rather than a statistical baseline, on which to go). Clearly, however, there is now greater experimentation on the part of publishers with respect to form and format (Palgrave’s Pivot series, for example, promises to publish titles of between 25,000 and 50,000 words within twelve weeks of the completion of the peer-review process). The solution to the “problem” of slow scholarship does not, of course, lie simply with faster publication. Rather, it requires that systems of audit and evaluation do not unfairly disadvantage those disciplines and academics for whom “slow” scholarship is a fundamental intellectual activity. The particular periodicity of the REF introduces a clear element of risk for those academics who wish to pursue work whose periods of research and writing are measured not in months or years but in half-decades at least.

4 thoughts on “The quick death of slow scholarship?”