A VISIT TO THE SEAMAN’S BETHEL, NEW BEDFORD (PART 2 of 2)

A second guest post by Rachael Utting, a PhD student in the Department of Geography at Royal Holloway, whose project is entitled ‘Collecting Leviathan: curiosity, exchange and the British Southern Whale Fishery (1775-1860)’.

An extract from the journal of whaling surgeon Dr Eldred Fysh describes the committal to the deep of the body of a deceased whaleman early one morning. The attending doctor laments that the dead man will be forgotten by teatime, such was the callous nature of whalemen. He was not alone in this viewpoint. Whaling surgeon John Wilson described the crew of the whaleship Gypsy “the very lowest dregs of society, the refuse of Ratcliffe Highway and New Gravel Lane [in Wapping.]” However, a visit to the Seamen’s Bethel in New Bedford tells a very different story. The Bethel, or sailor’s church was built in 1832 to cater to the spiritual needs of the town’s large whaling population, particularly before embarking on a voyage, or to give thanks for a safe return. The Seamen’s Bethel sits in the New Bedford Historic District, a cultural area designated to protect and promote the towns whaling history. That history can be read on the small, neat marble plaques lining the walls of the Bethel, erected to the memory of whalers lost at sea and members of the local fishing community lost in more recent disasters.

There are stories of shark attacks, accidents, drownings, and disease. What strikes me in the Bethel is the palpable sense of sadness at the passing of crewmates. Many memorials states, “payed for by his crewmates”, “erected with respect”, “payed for by subscription.” Whalers were a notoriously poor bunch, earning a ‘lay,’ a percentage wage based on the amount of oil brought home and their seniority within the vessel. Some whalers came home owing more money than they had earned, their meagre lay having been eaten away by the extortionate prices of ships stores, known as ‘slops.’ That on their return to port they were prepared to spare their pennies to remember a crew mate lost at sea, perhaps several years previously rather counters Dr Fysh’s comments. It also tells us that crewmen were maintaining the relationships forged onboard whilst back on land. It would take time, organisation and communication to bring together the funds to erect a memorial. In the coastal towns of the Eastern seaboard many men went whaling with family members, sons, cousins and brothers (a trend mimicked in the London whale fishery but to a lesser extent.) However, the plaques also memorialise foreigners such as John Glover of London, lost overboard, Daniel Burns of Pictou, Nova Scotia, and Charles Wilson of the Sandwich Isles (Hawaii.) These show the international nature of the nineteenth-century whaling trade and highlight the strength of bonds created between crew members during long whaling voyages, irrelevant of nationality. As the epitaph to Londoner, John Glover reads, 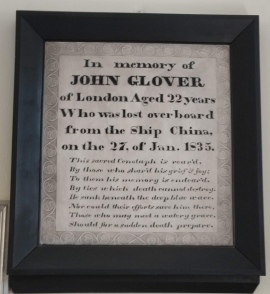 “This sacred cenotaph is reared,

By those who shar’d his grief and joy:

To them his memory is endeare’d

By ties which death cannot destroy

Nor could their effort save him there,

Those who may meet a watery grave

Should for a sudden death prepare.”

Considering the American portrayal of the heroic golden age of whaling and conversely the lack of historical memory regarding whaling in Britain, the Seamen’s Bethel offers us an opportunity to recast whalers in a more nuanced vision; less as the dregs of Wapping Wall, but not quite the American vision of heroic masculinity fighting the elements. It allows nineteenth-century whalers to be seen as human and caring. To be both sombre and sober.