On Tuesday 18th February, we held a special extended Landscape Surgery in conjunction with visual urbanists from Goldsmiths, which explored how materiality of place can be engaged through visual practices. Surgeons enjoyed four presentations that brought together academic investigations and photographic work, by Mia Hunt (RHUL), Rachel Sarah Jones (Sociology, Goldsmiths and the International Association of Visual Urbanists), David Kendall (Visiting Fellow, CUCR, Goldsmiths), and Ben Murphy (University of the Arts London and ‘Landscape Surgeon’).  Vibrant discussion was chaired by Philip Crang. 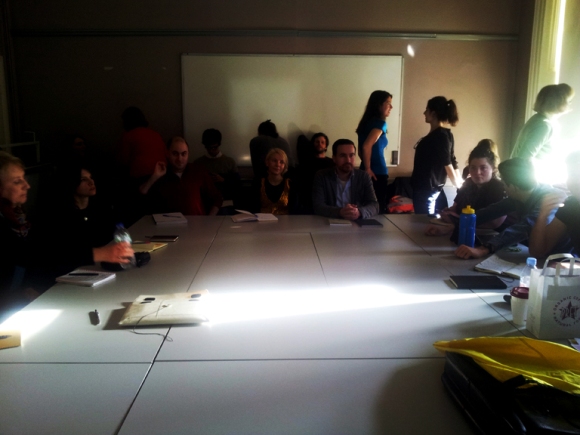 Mia opened the afternoon by presenting a paper in press with Geography Compass, entitled Urban Photography/Cultural Geography: Spaces, Objects, Events.  The paper draws from her visual ethnography of London’s Ad Hoc shops and her experience at Goldsmiths’ Urban Photography Summer School, which she attended in 2011. It set out ways of attending to material and place with the camera that chime with contemporary concerns in cultural geography: by evoking the feeling of place and its material richness; opening work to ambiguity and chance to create space for interpretation; playing with value, hierarchy, and the agency of matter; and highlighting the matter of our own bodies caught up in events.  The paper focused not only on images, but on the practice of doing urban photography as a performative methodology.  The images she showed – both her own and by others – were not only evidential, but also depicted atmosphere and emotion.  Here, images are both self-explanatory and mysterious; space, light, and time are described, but often revealed as unknowable. (An earlier version of the paper is available on her blog at: http://keepingshop.blogspot.co.uk/.) 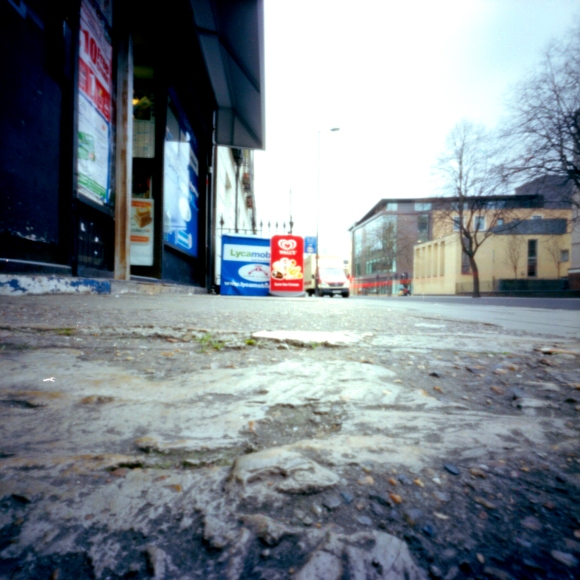 Next, Rachel Sarah Jones showed a series of vivid abstract urban photos: Landscape of Disappearance.  At once, these images highlight urban materiality, immateriality, legibility, and illegibility.  Rachel discussed how she works with coloured filters, light reflections and layerings of images to create abstractions that respond to the flow and pace of urban life. She spoke of how mundane urban experience often occludes place in favour of speed and movement. The Landscape of Disappearance in her photographs is a response, but one that seeks to cross between place’s materiality and immaterial states of being.  Her collaborative approach to working with place highlights its affective vibrancy while allowing it to disappear. (You can see more of Rachel’s photographic practice at http://rachelsarahjones.com/.) 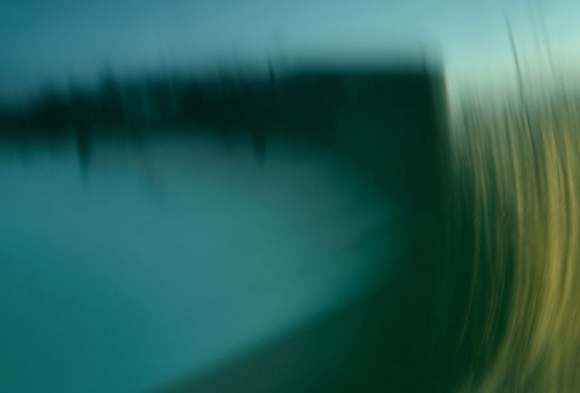 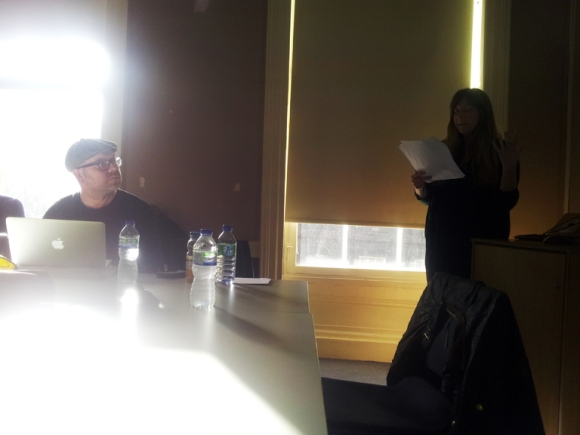 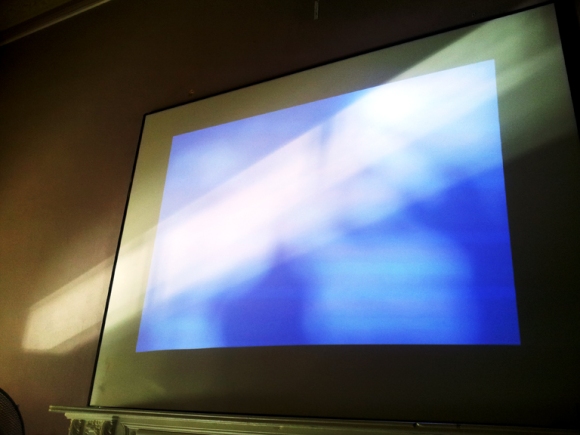 David Kendall then shared a budding project on mobility and interstitial spaces in Doha.   Like Rachel, his work interrogates the velocity of urban experiences and the illegibility of the city.  Before revealing the project’s first images, David described his own feelings in Doha: his sense of being out of place, his experience walking along highways and other overlooked sites, and the feeling of the climate on his body.  His images – flattened, desaturated, graphic, and textured – describe the limits of his access, both socially and in terms of built form, and capture his sense of disorientation as an outsider.  (You can see more of David’s work at http://www.david-kendall.co.uk/.) 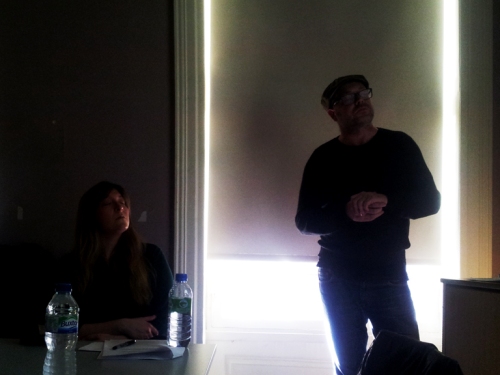 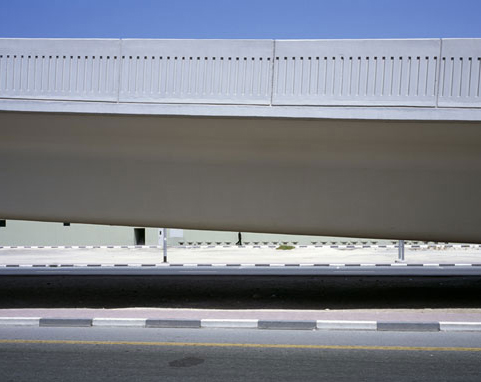 Finally, Ben Murphy showed images of temporary settlements in southeast Spain from his on-going doctoral research. The project considers how the materiality of these dwellings constitutes alternative settlements and new relationships to ‘mainstream’ lifestyles and rejected urban environments. His use of a large format camera brings a heightened reality to his images and the things they describe.  These people-less portraits are rich with feeling.  They awaken and lay bare the material of these counter-cultural lives.  (You can see more of Ben’s photography practice at http://benmurphy.co.uk/.) 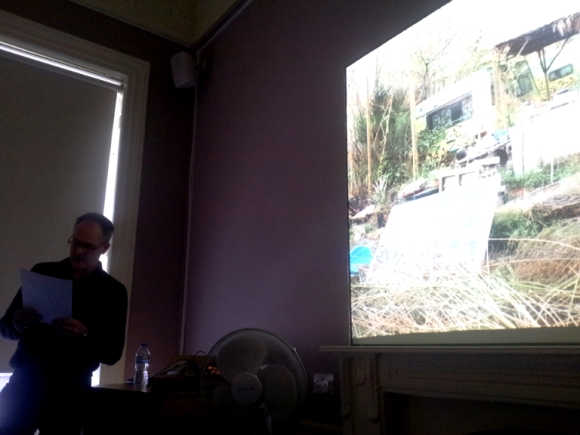 A number of themes worked across these bodies of work and were drawn out in an animated discussion. Collectively, the work could be seen as problematising the common distinction between photography as aesthetic and as evidential. The images shown were aesthetic objects that permitted a new engagement with materiality of place. Evocative and feeling, they contribute to academic work in ways that go beyond the documentary and the illustrative. The materialities of photography are deployed as a way to think through the material of place. Images become a way of reflecting. That said, through blurring, disappearance, and illegibility, much of the work critically reacted to our inability to know place. Themes of visibility and invisibility recurred. Photography here is a way of attending to place while showing that it cannot be pinned down or captured. 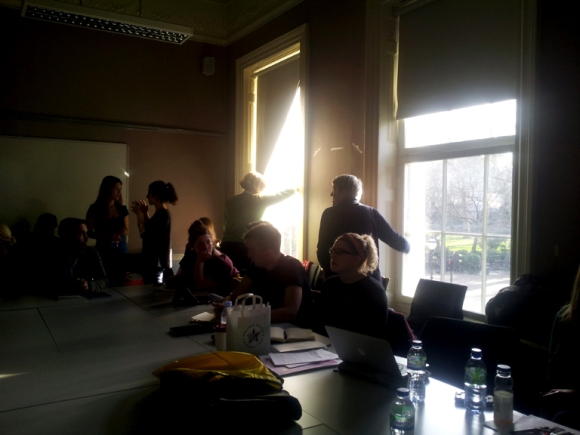 Many images captured the material and movement of place, while also engaging with the material of the photographic process.  The acetate filter, the bulk of a large format camera, the undulation of the film in a pinhole camera, the corporeal experience in a foreign place… visual practice was shown to be as material as the places it attends to. This in turn has implications for how photographic work is shown and seen within academic cultures and economies.  There are questions about the relations between image, speech, and text, as well as about the capacity to publish photographic work for social science and human geography ‘readers’. Overall, though, the session’s discussion of the materiality of photographic practice enhanced the shared sense that photography can work with place in a spirit of collaboration to evoke its material and feeling. 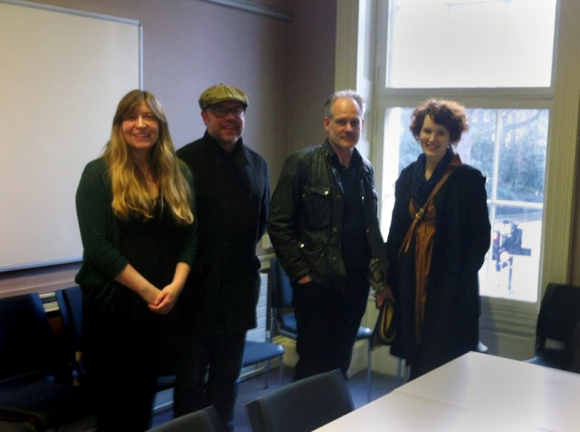 The Perils of Commuting

Trains hey. Love them but they are not the most reliable and certainly susceptible to “inconveniences” being caused. Yesterday I had a stark reminder of this. My journey back from Royal Holloway to Guildford requires two changes, fortunately I was offered a lift to the first change en route and was looking forward to getting home earlier than anticipated.

Due to the very sad occurrence of someone being hit by a train, I had an hour wait for a train to arrive to take me the 10 minutes from Weybridge to Woking. Upon alighting, I was faced with another hour wait for my connecting train to Guildford – again a ten minute journey. With no buses running that late, I had a choice between waiting for the train or paying for a taxi.

In the end, I decided to run. A route I… 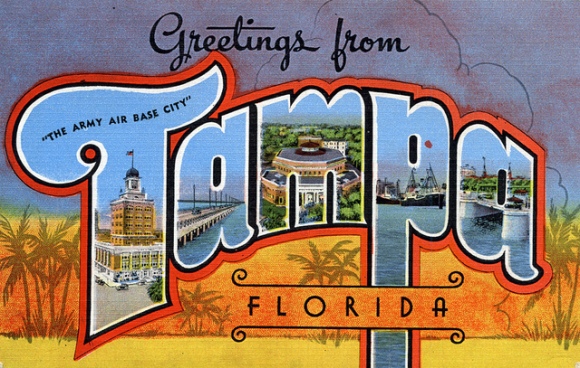 The preliminary programme for the 2014 Annual Meeting of the Association of American Geographers has recently been published. The Department of Geography at Royal Holloway, University of London will be strongly represented by both staff and doctoral researchers (detailed below).