Roundtable: the materialities of geographical representation 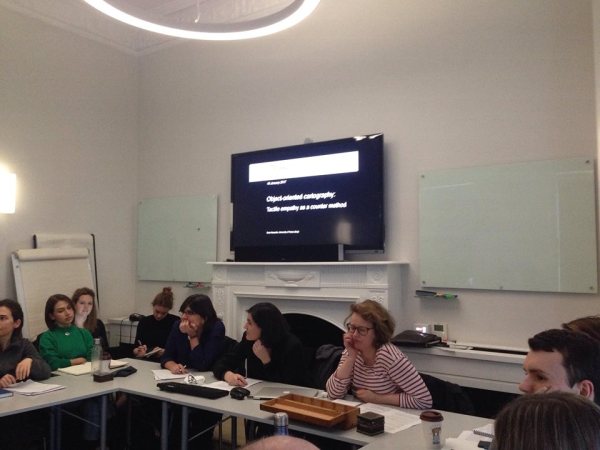 On Tuesday this week, Landscape Surgery were fortunate enough to host Tania Rossetto (University of Padua, Itlay), Luciana Martins (Birbeck University) and Emily Hayes (Oxford Brookes). The three led a panel session on the materialities of geographical representations, with a specific focus on their ongoing research on maps, films, photography, drawing, and lantern slides, and broader methodological issues.

The session began with Luciana discussing her work on Guido Boggiani and the Caduveo body painting. Luciana described how she works through the visual archive of expeditionary travel and the distinct forms of visual culture implicit within European travels in South America (1850-1950). She aims to bring exploration photography and film into dialogue with expeditionary drawing. She also describes how she seeks to explore the embodied experience of image making in expedition and the ‘dialogical aspect’ of image making which occurs through cross-cultural interaction in the field and the editing and re-editing of these images through new contexts of storage and display. Luciana began by describing her first encounter with the Caduveo images in an exhibition of images, drawings and postcards of the Caduveo at the Museu Historico de Pantanal Corumba.

Luciana then traced the process of transformation of Caduveo body painting into the ethnographic and material work of Guido Boggiani. Boggiani drew many sketches of the Caduveo and their body paint. Following Boggiani’s death, German ethnologist Robert Lehmann-Nitsche published Boggiani’s photographs in a postcard series. Lehmann-Nitche however believed he needed to adjust and calibrate these images in order for these postcards to fufil their role in the circuit of the visual economy of ethnographic types. Luciana used these postcards to begin her discussion into how the body painting of the Caduveo has been re-embodied and re-materialised as it moved from skin to paper to tiles, ceramics and fashion. 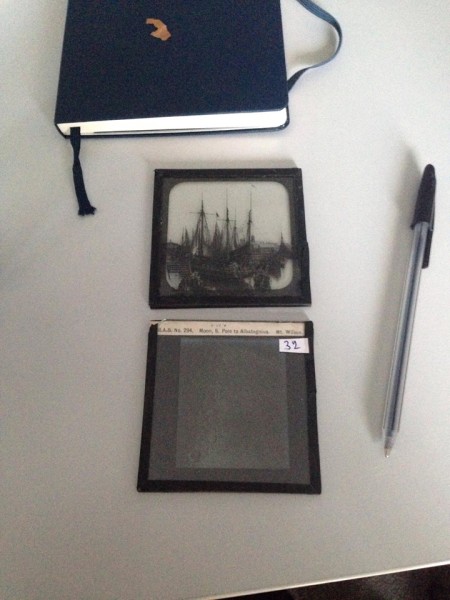 Next, Emily began her presentation by distributing a variety of lantern slides, asking us to engage with them and ask questions of our interactions with the medium; how they looked, how they felt, what we thought of them. This opened up her discussion of the role of lantern slides in the history and development of the RGS and the geographies of geography. Through a focus on the lantern slide, Emily discussed the implication of material objects in shaping both the RGS and the wider body of geography. Emily discussed how during the 19th century, lantern slides were used to both educate and entertain. As a result, Emily explained that the medium transformed who the geographer was and could be, through the presence of the lantern slide in scientific, mixed audience and children’s lantern slide lecture series at the RGS. These lectures shaped and diversified the demographic studying geography and lantern slides were often the centrepiece of these discussions.

Emily then went on to highlight how lantern slides afforded experiences of wonder and virtual travel to increasingly wide audiences within the RGS and beyond and therefore the implication of lantern slides in the reconfiguring of time and space. Emily concluded with a discussion of her work in re-mediating the lantern slide within the digital world through her cataloguing, photographing and image editing of 1000 lantern slides from the RGS-IBG collections to LUCERNA ((https://www.slides.uni-trier.de).

Finally, Tania introduced us to her research which applies the ‘pragmatic speculative realism’ proposed by Ian Bogost’s Alien Phenomenology to the realm of cartography. She explained how her work is inspired by an object-orientated philosophy to propose an ontography of maps. Tania highlighted how this object-orientated approach can contribute to map studies but also how an object-orientated cartographic theorization can contribute to ideas of speculative realism. In passing around map-like objects, Tania asked us to consider how the explosion of geovisual devices and practices is profoundly changing the profile of cartography within society and has meant that cartography has somehow receded into the background. Tania therefore proposed that a more explicit object-orientated approach to maps should be adopted as emergent cartography remains concentrated on human knowledge, action and use. Map theory has therefore not yet attempted to put cartographic objects in the foreground and therefore Tania described how her object orientated approach can allow the anonymous lives and various spatialities of cartographic objects to be made visible.  Tania also discussed her use of photographic and visual methods, which she feels allow the map to give back its experience of being touched.

The subsequent discussion session ranged from questions of the ‘cragginess’ of material culture vs the ‘repulsiveness’ of digital culture, the uses and limitations of digital methods, the role of geographers as peddlers of illusion, the responsibility of digital restoration and the role of the interface in object materialities. We would like to thank Luciana, Tania and Emily for leading such a lively and well received session. We wish them all the best with their ongoing research and hope to welcome them back to a Landscape Surgery session in the near future!

edit: We would very much like to thank Emily Hayes for clarifying her work with the cataloguing and image editing of lantern slides. The blog had previously incorrectly stated that Emily’s work involved the ‘uploading of
some of the 20,000 lantern slides owned by the RGS to LUCERNA: the
Magic Lantern Web resource platform.’ In fact, Emily work involves the ‘cataloguing, photographing and image editing of 1000 lantern slides from the RGS-IBG collections to LUCERNA
(https://www.slides.uni-trier.de)’. The society estimates that there are approximately 20,000 slides in the society’s holdings overall and other individuals were involved in the actual uploading of the images. We would like to thank Emily for clarifying this and for bringing this mistake to our attention. We would also like to apologise for any inconvenience this error caused.