This is to announce the programme of the 16th International Conference of Historical Geographers which is being held in London this summer. The conference is held triennially and this year it is taking place at the Royal Geographical Society (with IBG) from 5 – 10 July. The conference website is at http://www.ichg2015.org

The full conference programme is now available for browsing at http://www.ichg2015.org/programme/online/

The programme includes 550+ papers, a series of high-profile plenary lectures and a remarkable programme of study visits, notably to London archives and museums, and field trips.

Plenary lectures will be presented by Catherine Hall, Simon Schaffer and Alan Baker. ICHG delegates are warmly invited to attend the newly-established British Academy Lecture in Geography, to be delivered byWilliam Cronon, Frederick Jackson Turner and Vilas Research Professor of History, Geography, and Environmental Studies​ at Wisconsin​, at 6pm on Tuesday 7 July. http://www.britac.ac.uk/events/2015/Who_reads_Geography_or_History_Anymore.cfm

This is a truly international conference, with delegates coming to London from all over the world. The participation of early career scholars and postgraduates is particularly welcome. Registration is via the conference website – the deadline for early bird registration is 13 March 2015. See http://www.ichg2015.org/registration/

The Art of Skating

Hannah Awcock provides a brief run down of the Art of Skating event, which marked the start of Passengerfilms’ 2015 programme. The event was full of Surgeons – curated by Oli Mould and hosted by Harriet Hawkins.

The first Passengerfilms of 2015 had a great turnout (Photo: Thomas Dekeyser).

Tuesday night saw the launch of Passengerfilm’s 2015 programme in the Jetlag Bar, Fitzrovia. The title of the evening, curated by Dr. Oli Mould, was The Art of Skating. The evening began with a showing of Blue Line, a short film that follows skateboarders as they move through the urban landscape. The feature film wasBeautiful Losers, a documentary about a group of American artists who became famous for their ‘do-it-yourself’ style of street art in the 1990s. A short film calledXerox and Destroy was also shown, about the Photocopy Club, an unconventional exhibition of skateboard photography. The discussion after the screenings was chaired by Dr. Harriet Hawkins (Royal Holloway, University of London), and featured Professor Iain Borden (Bartlett School, UCL), Marc Valée, a documentary filmmaker, and Sabina Andron (Bartlett School, UCL). 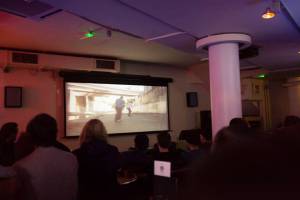 On Monday 26th June (6:45pm) Free Word (60 Farringdon Road) are hosting a free evening event to launch the pdf publication of “Weatherfronts – climate change and the stories we tell”: new works commissioned by TippingPoint with Free Word and Spread the Word. See https://freewordcentre.com/events/detail/writing-climate-change for details and to book.

Think of radical changes in the ways humans have been mobile throughout history. How did those changes happen, how did they influence every sphere of life, how did they reshape societies or reinforced already existing identities, classes and norms? What probably comes to one’s mind first is a series of inventions: from a wheel to a car. Then one may think beyond innovative vehicles: both daily and global mobilities have been entangled into a variety of (geo-)political processes, societal transformations and development of new technologies in other spheres, for instance, ICT.

Now as the societal awareness of the consequences of the climate change grows and new policies are adopted by states and local governments, will that induce a series of changes in the way we move, a mobility transition? 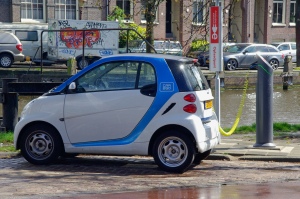 The two year project “Living in the Mobility Transition” aims to identify policies, visions, organizational forms, technologies and practices that develop in 14 countries in direct or indirect relation to climate change. Will we move more or less? What vehicles will we be using? What meanings will mobility have in various contexts? Who is steering relevant policies and what are the rationales behind introducing new regulations, vehicles and practices? How are the questions of social justice implicated into the visions of transition? How are visions of mobility transition contested, how do they succeed or fail, become exported or abandoned?

The project team will seek answers to these questions through analysing grey literature and conducting interviews with key stakeholders in fourteen countries as well international and surpranational organizations. The research has started with the two pilot case studies conducted in Canada and the UK, focusing on a variety of policies from encouraging active travel and flexible working arrangements to building public transportation infrastructure and supporting the use of new low-carbon vehicles.

Presenting at and convening conference sessions is a major part of the postgraduate experience – and so many of you have already had those experiences. This week, in a real flurry of news for me, I have been given the opportunity to do it for the first time – twice!

First came the news that my paper on Agreement for Sustainable Devolution for Cornwall has been accepted for the Association of Celtic Students Annual Conference at the Penryn Campus of the University of Exeter, and then, on Wednesday the ‘biggie’ – my proposal to convene two sessions at this year’s Royal Geographic Society Annual Conference on The Contemporary Growth of Regional Identity in Europe was accepted. Flippin’ ‘eck! Heady stuff for a Masters student!!

My initial reaction was that it was fantastic that my particular field of research was being validated by the wide academic community. We all plough our separate fields, engaged in our own areas of interest. At times, this can be a lonely existence, with the researcher often feeling: “This is of major interest to me – but does it have any wider currency?” At least, right now I can see that the answer is “Yes!” Then of course comes the associated “Oh My God, I’m going to have to share my particular range of research with a huge range of people whose levels of interest in what I am doing is considerably varied” and the consequences of this.

In my day job, as a primary school teacher, I have to get up and ‘present’ in front of 26 children 2.5 days a week, so you could be forgiven for thinking that it will all be a breeze, and there’s nothing to worry about – but somehow 8 year-olds are not such a nerve wracking audience for me!

It has been fantastic to see that so many of the Royal Holloway surgeons have also been successful with their applications to present or convene at this year’s RGS-IBG Conference. I guess I’ll see you all in Exeter!